A form of cooking that may be as old as time itself, the origins of soup is rumoured to date back to the stone age. The act of combining various ingredients in a large pot to create different variations of flavour for different purposes made it the perfect choice for any culture… and for my grandmother too, when she first started cooking for her own children.
My grandmother grew up poor and naturally, so did my dad and his  six siblings. Working 3 jobs round the clock every single day as largely a single parent, supporting seven children during those times was near impossible. She made a choice, back then, to give up being a mother. She had no time to cook, to teach, to pacify her own children. Instead she cleaned, scrubbed and peeled for others while they spent time with their families. It is under these circumstances, that soup came to represent her love for her children. Easy to make and serving a wide variety of functions, soup was the first thing my father saw in the morning and the last thing he ate before he slept. Somehow, my grandmother found little pockets of time to cook for her family, even if it was bland and thin — the least she could do as a mother.
Those days may be gone but the soup stayed. It is not surprising that her role as a grandmother started with soup as well.  So soup to me, represents family. Having grown up with my grandmother’s cooking, our weekend family gatherings always ended with a bowl of soup for every single one of us. Even in my generation, we believe that soup is more than just food. It encompasses the love and care she has for us and more notably, it served as a common thread that brought our family closer. There were different soups for the different moods she was in, largely affected by the weather — the mild taste of radish soup to match the peaceful days when the sun and clouds rests just right in the sky. Lotus root for rainy days when all we needed were warmth and flavour to chase away the chill that rests in the chasms of our hearts.
Soup defines my relationship with her and my relationship with my cousins as well. We always commented about the “soup of the week”, trying to guess what ingredients were in the new recipe my grandmother came up with. I guess that’s another magical thing about soup, there is not set “recipe” that one has to follow. It comes from the heart. Adding ingredients that just “feels right”, a little more or a little less and the whole dynamics of how the flavours work together produces an entirely different effect. It’s like shifting every piece of furniture in your house a little to the left. Sometimes you can’t exactly tell what is different, but you know that something has changed.
I guess that’s why it was huge blow to my grandmother, when she lost her sense of taste. Her ability to measure every teaspoon of salt she added into the pot just by sipping a mouthful, faded as she grew older. Of course, being family we encouraged her and still drank the soup she cooked  with as much anticipation as before but we all knew, it was never quite the same. The strange thing is, it didn’t bother me that the flavour was different. In fact, it just made everything more special. I savoured every single mouthful of soup I put in my mouth, nostalgia flowing through me when I finally recognise a familiar taste. It made me treasure her cooking more and the memories we shared.
It’s funny sometimes, when I think about it. A simple thing such as soup, can evoke emotions that I may have otherwise never surfaced. It makes me wonder, if sometimes, we just happen to look past the simple things that may matter to us most, without as much of a second thought. 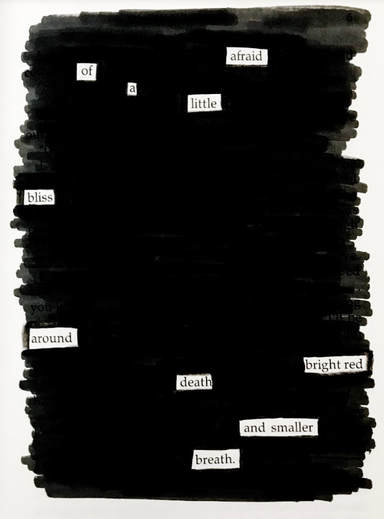 Tonight, a man lies on a rooftop, testing
The boundary between the city
And the sky. It is nondescript, another leaf
Among the token bonsai that dot
The cold concrete, another faded shirt
Palely loitering on the frayed, swinging
Clotheslines, another curtained window
Among the towers of the sleeping city.

His mattress is for two, cement slabs
Chosen for a scenic view of the star-starved night,
Lit by countless streetlamps to the lavender
Of sunset. He pulls loose bricks into frame, two
Lovers' pillows (crumbled mortar turning
Their hair white, sans the trouble of passing time)
And one nightstand between them, holding
Two cups of dollar-store coffee (the only thing
that keeps their tired bodies moving), steam
Woven with smog to cloud the absent skylight,
A velvet quilt for this greenhouse love.

His headphones are downstairs, but
He hears a symphony, the quiet moans
Of ventilators, whispered conversations, motors
Skimming the asphalt a thousand miles below. It plays
For them, the sleeptalking city an unseen orchestra
Gently pulling at his eyelids, heartstrings untuned
By his untouched coffee. He slips, and almost feels
A silken smoothness beside him, a sip
Taken from the second cup, an afterimage
Of a smile he's seen before -- Almost touching.
The clotheslines are taut, pulled thin;
They lie parallel, back to back, layers
Of tattered clothes between them, but nothing else.

(Where are you? Beyond a screen
That he cannot see, a window to another world
He can only dream of)

There is a sigh; he breathes for two, and her goodbye
Echoes quietly through his lips. Her footsteps
Resonate through the stonework; tonight,
They will come no closer than breath
Misting on the opposite ends of a phone call. It is only
When his eyelids and the stairwell door slide shut
And her footsteps fade into silence
That we leave him, sound asleep
On another rooftop in another city;

It is only for this moment, tonight,
That two
Become one.
​​Tchaikovsky’s first movement tethered where small
Rocks skid off, an uncast spell on the tip
Of a magician’s wand. The conductor’s blazer a-
Cross his poised shoulder quivered
With the strain against the floodgates for the

Second movement, waiting for a cue.
The doors creaked open and
Indiscreet shadows intruded upon the golden scene
Ripe, ready to be plundered, except they
Know that nobody was waiting for them to take a seat.

Everybody was waiting for them to take a seat
Gazes traced the path from a flick of the conductor’s wrist
Intensely trying to see what had frozen him in his track, then
Waiting for the “close sesame” that was withheld too
Long as the gold and treasure were looted.

The conductor sighed, to himself, to the audience
He was performing to, the pathetic crowd of casual
Warbling babies still shrieking as they sat and he
Knew this stage was not where he imagined his genius
Would sputter and grow stale in.

Everything. A dreadful moment passed, a telltale
Hiccup of a scratched CD in the mouth of the player
Freezing in a glitch glitch where the concert seemed like it would
Stop when the conductor crumpled beneath the spotlights
Weighed down by the unuttered wail of the last of a dying breed.

The last of the late-comers settled
Just as noisy and unaware that in another fragment of time
We were witnessing the last violent shudder of a magnificent
Dying beast. The conductor raised his wand, satisfied when the silence
Was complete.

The air, thick with gold once more,
Heralded the calm dip into the second movement
not to say that i
want to die, but that i
am tired of my throat
hurting all the damn time. i
am still chained to knobbly
fingers longer than they seem. roots
force their way down throats. i
laugh at my ugly hands. bloody
raised palms. i laugh at you.
i do.
not to say that my
life is bad, but that i
am dull. if i
try hard enough i care about
my feet. my mind and i, we
tread in a moat of floating dreams
and i don't need them. they
hurt my feet. when my mom
dies tomorrow i'm afraid i
can't cry. what will they
whisper? heartless bitch. i
don't crave death, per se, what i
miss is being alive. what i
want is her rampant heart. what i
need is the rush of danger (silver
lines against crimson veins hold me
close closer closest).
i'm sorry if you came expecting
flowery imagery. they
above are more than willing. i
tell you my truth. the truth is,
if i die young then this
is my mid-life crisis and i'll
fucking do what i
want. what do i want. this
year i wished for unlit candles
and ivory chrysanthemums. i
wished for truths displayed like bloody
blossoms for the world to see. there! your
fucking flower imagery. do you like
it? are you happy now? at least
one of us should be.
​the teacups, they runneth dry.there is no use for poems or rhyme,
when there are no emotions truly my
friend. i tells myself it is no crime
that i dream in black and grey,
colours so dull they aren't worth a dime.
ultraviolets aren't worth the cry.
the mornings are saved for alabaster
teapots and pale lavendar cookies.
pinings are the founder of guilt. i plaster
smiles on my face. honey-tongued, "yes
i hear you" and even if i didn't, disaster
isn't imminent. after all, everything dies,
your love just faster. (you liar)
you (i) keep up this charade (can't hear), and i
don't know how to talk to you anymore.
my cracks show, and you don't care to see me cry.
unrequited love is the purest form of shame
(you said) but you do not notice as my spine crumbles,
and my laugh still rings hollow time after time
to carry this cremated conversation on
weary shoulders.
​​I looked at your broad shoulders,
as you stare at my eyes.

I watch you walk past me,
eyes never leaving mine.

I've always wondered why,
why do your eyes look at me like this?

I want to run up to you to hug you,
To just embrace you in my arms.

I want to know why you watch,
but never let out a peep.

I want to know why you act as if you care, and come so close,
yet you move so far when we touch toes.

I watch as you brush past me again,
This time I grabbed you.

You turn around to look at me,
I watch you with heavy eyes.

Your expression astonished,
my body defenseless.

You stare at my eyes again,
this time asking me what I ne--

I shake my head,
and let you walk away.

I bow my head down,
as i replied "you" silently again