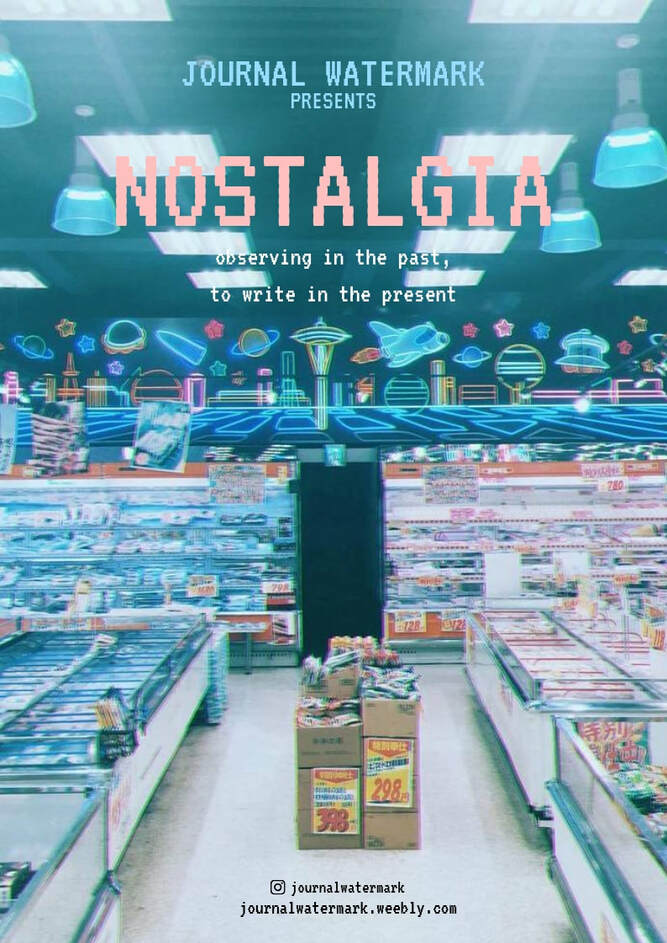 back when we were just kids, when we still possessed the boundless energy that one seems to lose with age, when we made everyone sigh and shake their heads with the noise we made, when we were too caught up in fun to care what anyone thought.

when we stayed out a bit too late, when we spent a bit too much, when we never wanted to go home?

we’d run through the sweltering heat of the afternoons, the sun beating down our backs and sweat beads dripping down our foreheads, our hearts beating double time and our heads pounding to the same beat and we were so, so tired but we never cared because of all the fun we were having.

and right after we were done we’d go out to stuff ourselves with more food, be it good or bad or tasteful or utterly and completely tasteless, and we’d sit and talk about everything and everyone else we knew. we’d always end up laughing, a bit too much, a bit too loud, staying for hours, going home too late just to get screamed at by our parents.

it wasn’t much. we never ate anything too expensive, never did anything too obnoxious. and yet it was the most fun i’d ever had in all these years.

it was those days we’d walk rounds under the moonlit sky. just the both of us, going round in circles, discussing the questions no one knew the answers to about the world and the universe and all the what ifs and the why nots.

it was those days we’d laid a bit too long on the grass, looking up at the stars and talking about our hopes and dreams and naming as many constellations as possible. we never named as many as we’d actually liked to (all we knew was orion’s belt) but it never mattered to us, because we’d had each other and the night sky and that was all we needed at that moment.

it was on that exact same day we saw our very first shooting star. we’d all closed our eyes and desperately made all the same wishes we’d just been talking about, only to hear you exclaiming out loud to the rest of us that you’d missed it. you’d pulled out your phone and searched up a video of a shooting star, holding it up against the sky just so you could live the same moment as us as best as you could.

in that moment,all we had was each other, the infinite sky, and the even more infinite now umber of stars, yet i felt i had everything i ever needed.

do you think about those days occasionally? do they come to you when you least expect it maybe? in flashes on the bus ride home, in the cool quiet of the morning, or even in the crowd of the rush hour trains?

because i do. and it’s the same feeling almost every single time.

is it the same for you, too?

She was still here when I got there hours after check-in
Lustrous greys that dulled muffled taps, trailing to
Rented bed all made and messed up already, nestled
In the nooks of the thin sheets, temperature lower than
I know she was used to.

She was still here when we got upgraded to a brighter,
Greener room, where we had all the privacy in the world
Where her pores glowed amber, lines in her skin shone,
And the nights were sacred, every breath of hers a different
Mantra, prayer, incantation.

She was still here when I had to kneel to be closer to her
Dressed in layers of her sunday best, lips pearly, fingers
Knotted, tied, and pressed like withered flowers and skin
Painted, rouged and pretty. There were flames between her
Joints by the fifth day and then

She succumbed to the fire
Headfirst into the storming vent,
screaming our goodbyes
She was still here

Till the ashes settled and brittle bones broke
And she was in the night lamps past shut-eye
And she was in the glimpses of watery reflections
And she was in the shuddering breaths
And she was in my mother, crying at a seconds past
In my ink, in her smell on the bedspread the food we ate and her chair still left empty and the boxes of equipment she’ll never use and the room now unbearably unoccupied and the patch of sunlight in the kitchen at 10am and the jade bracelets and the lack of laughter and the still heat of an unusual christmas and


​
That’s her.
That’s the girl who
Hoarded black lines and blank spaces, and
Sniffed loose sheets like petals.
A whiff of chemical ambrosia.

She is someone else.
Look,
The furls of her cursive blazes through every page.
See how it lurches, manic with the insistence of one eureka moment?
Until, here,
The snap of an idea breaking off,
A swelling thought
Plopping heavily onto the earth.
Another seed, another tree.
And another empty branch left swaying gently,
An unfinished sentence
Suspended in white.

These days, white is all I have.
But I know
If I lift my fingers from the keys,
Gaze out the window,
She will be there.
Contemplating me sidelong,
She’ll murmur
Writing is simply to love the scritch-scratch of graphite on paper.
Like little crabs, scuttling into
Amber sand burrows.

And is this what you have chosen?
Your tuneless piano?

When she turns away to tilt her head towards the waves,
I will be reminded that
She hears words in their whispers.

It’s easy for you, isn’t it?
Creation without deliberation.

I reach out to press my palms against the sun-warmed glass.
When did this stop being a mirror?
It clings to a memory, and I, changed, no longer recognise myself in its face.

I blink, and the little girl, the sea
Disappear.
Another sort of Window gapes at me.
Through this one, there is nothing but to watch the cursor blink,
Blink,
Blink,
Blink,
Straining for hidden voices in Arial font letters
And hearing
Only silence, beyond the quiet clink of gleaming fetters.
Red light blinking and he slows to wait. Bright lights,
Oh how bright! The intersection at night is burning,
Alien head of surgical lamps. Look here, Doctor, examine
This carcass. In his mind:

An accident. Tire marks. There
Splayed on the road, himself, crossroads.
An accident? A massacre. There, the evidence
As graphic as it could get. He saw his youth, smudged
Night lights, smeared jam. Yes, jam with fruit bits.
Fatal, gaping wound.

He is stunned and something catches in his throat.
Anticipation in our boxed car — this is it, this
Is what he was driving at. He says: when I was younger...
If I had become a millionaire... He is stunned, the possibility unfolding
Only then, alternate lives, the sixth fleshy finger.
Big moist jewel melting into syrup, pried straight from the clammy
Unwilling fist of a child. Loot of a bully. Not his. Not this
Thing staring back, mottling chick patchy like old men,
Greying and puddling.

He tries again, this man I’ve never seen cry, tries again
To grasp what he had lost. Look here, the lights called.
Don’t lose focus, Doctor, not at the table. If I...
Perhaps he sees a car speeding through the red light. His lips
Trembled. His fingers trembled. The needle trembled.
It is difficult. I hold my breath. Please
Don’t cry. Please don’t cry. It is

Shameful, like flaccid worms writhing to death.
Being brought to tears at this age. He blinks and they
Slide into his voice, thickened now, gurgling blood.
Unintentional pauses, stuffing
Everything back. His guts, ropes of intestine,
Crushed or not. Picking up after himself at the crime scene.
He is old now. He trembles and holds everything in.
Sutures, now. The light flashes green. He looks down and the operation
Fails. He is dazed by the pure light. Bright, blinding light
Of his youth and endless possibilities and
The hand does not shake and the audacity, the
Audacity! He remembers! It moves him

Until he is reduced to a wet baby, thrust
Against that light, unblinking, dripping.
It is difficult to watch your own death
Again and again, I imagine. But this road, oh
It is such a dangerous path to take​

Before the smooth concrete roads,
Slithering around buildings like a snake,
Childhood was an old worn metal frame,
Cycling down a long dirt road,
The clickety clacking of those unoiled chains.
The groans and shouts of boyhood calling our names,
Replaced by the sounds of buildings rising,
Politicians falling,
And just as quickly as it arrived,
The last call of that foreign childhood name.
​I have buried them in the forgotten pits of hell,I have retired to my coffin to sleep in peace.
Yet, here they are, here they are --

The dead, alive again.
They look so happy,
They shine in the night.

Their smiles are unlike mine:
Pure and undecorated,
Savage and unrestrained.

They whisper
Promises of sanctuaries,
Of sleeping pills and serotonin,

Serenading me with timeless songs:
Smells and sights and snatches of
Conversation.

They have so much to say:
Lullabies and bedtime stories,
I feel so happy --

I am aware of my bedroom getting brighter
As they bleed up from the ground and spill
Everywhere.

They’re erupting all around me –
Bats, bats, bats!
A storm of nightmares.

To let go, for they have come,
Not to take me away,
But to claw back to me.